The research interests of our lab lie in polymer science and biomedical engineering. We want to combine both fields to develop biomedical devices, such as 1) conformal and biocompatible neural devices to study the electrophysiology of the enteric nervous system 2) responsive polymeric biomaterials for wound healing and 3) shape memory polymer bandages to prevent of Colonic Anastomotic Leak.

Details about our current Research Projects are listed below.

Irritable bowel syndrome (IBS) is the most common functional gastrointestinal (GI) disorder worldwide. It is estimated that 10–15% of the population is affected by IBS. IBS and other GI disorders, such as inflammatory bowel disease (IBD) which includes ulcerative colitis and Crohn’s disease, are diseases that are related to a dysfunction of the enteric nervous system (ENS). Understanding how the dysfunction of enteric nerves is related to GI disorders could help to improve the lives of millions of people. What if we were able to develop a gut pacemaker to actively regulate and stimulate impaired bowel activity?

Although the ENS has the largest population of neurons in the peripheral nervous system, it is not well understood and is less investigated than the central nervous system. Most of the information gathered about the function and electrophysiology of the ENS was performed ex vivo, either on pathological samples or in cell cultures. Common methods include patch clamp recordings on explanted tissue and imaging tissue in vivo, or in vitro. Current strategies for in vivo recording and stimulation of the gut are limited by lack of conformation to complex surface topography and flexibility for tissue movement. Thus, conventional stiff or cuff type electrodes cannot conform to the gut surface, do not achieve strong electrical coupling, and are susceptible to motion artifacts since they will be moving relative to the bowel.

We propose that the problems caused by conventional, stiff electrodes can be solved with the use of an electrode substrate that is of a self-softening polymer. The hypothesis is that the polymer is capable of softening and changing its shape so that the device can adapt to the shape and surface topology of its surroundings. It will wrap tightly around the gut, securing the electrodes in place to enable continuous periodic recordings of motor and sensory neurons from the myenteric and submucosal plexus.

With this proposed research, we hope to learn more about the ENS and its correlation to GI disorders.

For multiple in vivo applications, it would be beneficial if the electrode arrays would not only be flexible and conformal but also highly stretchable in order to withstand tissue and body movements without tearing. In particular, spinal cord stimulators and peripheral cuff and blanket-like devices may undergo considerable deformation during chronic applications. To fabricate fully elastic electronic devices it is not only important to have an elastic substrate, but also to have stretchable electronics. The first aspect, the substrate material, can easily be solved by the use of elastomeric polymers such as rubbery silicone. However, the materials that are commonly used for the electrodes and the traces are metals such as gold, titanium nitride or platinum and these materials are stiff and not stretchable. Often, the traces are shaped like serpentines in order to achieve some stress relief in the direction of tension, but this does not prevent the traces from breaking if too much strain is applied.

We are aiming to develop highly stretchable electrode arrays for surface recordings and stimulations (e.g. cuff electrodes and spinal cord stimulators) using elastic polymers as substrate material with conductive polymer composites (CPCs) as the electrode and trace material. The conductive characteristics of the polymer matrix can be changed through the incorporation of a filler into the polymer matrix. Different conductive filler materials, such as PEDOT, carbon nanotubes, and graphene will be investigated.

After colonic resections that may be necessary in case of cancer or diverticulitis, the two parts of the colon need to be reattached after the procedure. This procedure is called anastomosis and can be done through manual suture or staples. In any case, there are rates between 1% and 30% of anastomotic dehiscence reported in the literature.1 Anastomotic Leak is defined as a “leak of luminal contents from a surgical join between two hollow viscera.”2 If contents from the inside of the colon leak into the abdominal area, the consequences are various clinical signs like peritonitis; feculent wound, drain discharge, abscess, or fever. “Anastomotic leakage remains today a major cause of postoperative mortality and morbidity in colorectal surgery.”3

In order to minimize the risk of anastomotic leakage, we propose to develop a bandage made of SMP, which can wrap around the colon to seal the reconnected parts from the outside and therefore prevent any fluids to get into the abdominal cavity. The SMP will be fabricated into a tube shape that has a slightly smaller radius than the colon. The tube will then be radially expanded to a radius which is 1.5 times the radius of the colon. The device will be placed at the outside of the colon, covering the part where the anastomosis took place. The polymer will recover its shape due to the plasticization induced shape memory effect and will wrap tightly around to seal the colonic part after surgery against leakage. The SMP will be designed to be biodegradable in order to dissolve over the course of 3 to 6 months so that a second surgical procedure will not be necessary. The biodegradability and time span of degradation can be tuned by the number of ester groups in the polymeric backbone and the crosslink density of the polymeric network.

In addition, anti-inflammatory drugs and bioactive compounds that promote wound healing will be loaded to the polymer. This study will serve as a model to test the hypothesis that polymers loaded with bioactive compounds reveal positive effects on the healing process and can serve as a platform technology capable of concurrent drug delivery. 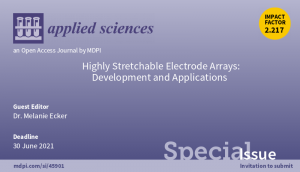